The Brothers Think Tank is a group of women and men religious who meet twice annually to address issues related to Brothers and to brainstorm ways of promoting the lay religious vocation for men. The Think Tank is comprised of members from

Conference of Major Superiors of Men

Recent meetings of the Think Tank have been hosted by the Divine Word Missionaries and the Maryknoll Fathers and Brothers.  The Think Tank is scheduled to meet again in October. 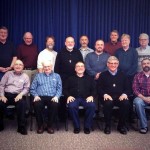 Opening remarks and introductions. Observations regarding the progress of the Think Tank but some members also voiced concern over how the Brother vocation remains unknown and how some mixed communities downplay the importance of the Brother vocation. Report from Br. Ben regarding his work at CMSM researching formation programs for Brothers in the U.S.  His findings include:

Br. William gave a report on the recent meeting between major superiors and Pope Francis in Rome:

Br. Ray Kozuch described some of the changes taking place within the RBC and of the work of its board members.

Morning Prayer Conversation with Br. Nich Perez, CSC Review of forthcoming documentary BRO: Men With Hope to Bring by Br. Nich Perez, CSC. Members then held a 45 minute Q & A session with Br. Nich who was available via conference call. The premiere of the film will be occurring in the first months of 2014 at a series of film festivals. The audience for the film is primarily young adults and religious should keep that in mind as they watch the film. Once the film is shown at the festivals it will become available for free to anyone who would like to view it. Presentation of two documents from the FSC community Br. Robert shared the major ideas from two recent documents, “The International Young Brothers Assembly” and “Statement of the Young Brothers of the North American Region of the Institute of the Brothers of Christian Schools.” Liturgy

Planning for the Year of Consecrated Life